Age: 29 Position: Goalkeeper Seasons: 1 Nickname: "Big Jase" Big Jase was the catalyst for our success last season. We have been crying out for a goalie for years and Big Jase has more than filled that gap! He is without doubt the Loxwood version of Peter Schmichel with the earbashings he hands out to his defenders, but he's also the first to congratulate you when you've done something well. Jase is a big character who has suprised a few people with his ability between the sticks but he is famous for his inspirational three word halftime teamtalks: "F** 'em lads!"

Age: 24 Position: Centre Back Seasons: 6 Nickname: "Biss" Christian is an explosive defender who particularly enjoys watching his opponents land! He is strong in the tackle and one of Loxwood's fastest players. A prolific scorer from set pieces, scoring 8 goals in the 1998/1999 season, he will be looking for more of the same after not netting so often last term. 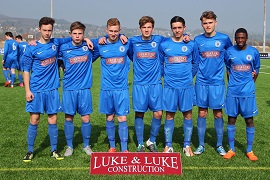 Now one of the longest serving Loxwood Players and voted player of the year two years ago, Christian has battled back from a badly broken leg and formed a formidable defensive partnership with Nick Pope and Duncan Greenwood. Biss is currently the only member of the squad who plays Saturday football and had a successfull last season with Roundhead who completed a league and cup double.

Age: 28 Position: Centre Back Seasons: 5 Nickname: "Shearer" Duncan is one of our most consistant players and last year scooped both the Player Of The Year and the Most Improved Player awards at the AGM. Although our own version of Alan Shearer, Duncan does not quite have the Newcastle man's eye for goal. In fact getting over the halfway line is nosebleed territory! Dunc is a solid defender and an excellent man marker and he will be looking for another good season after the success of last year.

Age: 25 Position: Centre Back Seasons: 2 Nickname: "The Ice Man" Eddie is a very cool customer who is now coming into his third season with the club. An excellent marker who has only ever scored one goal for Loxwood - what a shame he didn't mean it! After several seasons playing on the immaculate turf of Finchampstead FC it is not surprising that Ed is scared of getting his knees dirty. "I don't do slide tackles, it's not my game y'know". And his cool demenour was somewhat lost on a Woodley Hammers striker who once proclaimed: "He's got his legs tied together!". Ed will be a vital member of the squad this season, his versalility to fill in at wing back or in midfield could prove essential as both Loxwood teams push for promotion.

Age: 24 Position: Wing Back Seasons: 3 Dom is another player with his eye on the right wingback spot. Dom is a solid performer, adept at cutting inside his man. Has scooped the most improved player award recently and has been improving aspects of his game season by season. Dom is not really a goalscorer and could be classed in the "halfway line is nosebleed territory" category. Still waiting for his first goal he has his eye nervously on Pete Borrett's "You'll never score for Loxwood" title. Dom will be looking to carry on where he left of last season and cement his place in the team which he won back late on last season. Famed for his prowess at sniffing out a meal from 200 yards, Dom is always the first to start on the food at the pub after a game, and usually the last to finish.

Age: 26 Position: Defence Seasons: 3 Nickname: "Huggs" Hugo joined the club at the same time as Dan and Ed. Following a good start to his Loxwood career he has drifted in and out of the side (and conciousness after a few particluarly heavy Saturday nights). Hugo will be looking to grab a left back spot this season after some impressive displays for the reserves last season. Hugo is normally the least 'well' looking person when we meet on a Sunday morning and if he can shake off his hangovers before 10:30 he could have an excellent season.

Our first team reports can be found here and about the reserve team - here.

Age: 29 Position: Centre Back Seasons: 1 Glen joined the club at the begining of last season and quickly became an important member of Pete Borrett's team. Glen turned in some good performances at the heart of the defence and will be a key player for the time that he is available this season. Unfortunately Glen will only around for the first few months of the season as he will be completing a big money Bosman move to American Major League Soccer!

Age: 32 Position: Left Back/wingback Seasons: 4 Dave has just signed for us again this season after a six year absence. Brought in to the squad to fix the problem position of left wingback, Dave looks like he could be the man to fill Russell Fisher's boots. Dave last played for Loxwood at the same time as Brian Smith's son so that either tells you how old Dave is, or how young Brian is!

Age: 31 Position: Centre Midfield or Sweeper Seasons: 14 Jason has managed Loxwood Park Rangers for the last three seasons. This promises to be the most difficult as he will attempt to keep 37 players happy as the club expands to include a reserve team. Jase is deadly at set pieces, especially corners, although his penalty taking is a bit dodgy! An essential part of the team, Jason has always tried to impress on us the benefits of playing passing football and he is beginning to see us doing that. Overall, a very good midfielder or sweeper with an excellent technique.

Age: 24 Position: Centre midfield or wing back Seasons: 5 I have played for Loxwood for five seasons now, with two of those spent in goal. After life between the sticks I moved out to midfield and was voted player of the season. Since then I have struggled with form a bit but I'm raring to go this season and even think I might manage a few goals. However given my appalling record in front of goal I'm not sure how likely that is! I think my main attributes are taking on defenders and my pace, but definately not shooting. I created "How Many Times Referee" during 1998 which makes us one of the longest running Sunday League websites on the Net and I have been the editor ever since.

Age: 25 Position: Midifeld Seasons: 1 Another one of this season's new signings, Andy looks to be a good aquisition. Yet to find his niche in the team, the upcoming pre seasons friendlies should give him an opportunity to stake a claim for a first team place. Intoduced to the club by Hugo, Andy is a skillful player who looks able to fill in anywhere across midfield or defence.

Age: 24 Position: Wingback Seasons: 3 Jack has re-signed for Loxwood this season after two years in the footballing outpost of the Bracknell Sunday League playing for his boss' team. Since he has now changed jobs there is no longer a need to arse lick and has come back to the mighty L's. Jack is a skillfull fullback or wingback with a great left foot he also has an amazing arial ability - he can jump and duck at the same time!.

Age: 23 Position: Centre Back Seasons: 1 Asif was introduced to Sunday League football last season and has made encouraging progress since. One of the most enthusiastic members of the squad, Asif loves his football and will be looking to establish himself in the reserves after some man of the match performances last season. Primarily a centre back, Asif has been steadily improving other areas of his game. A defender with good pace and a strong tackle, Asif is known for his favourite phrase: "Back door!"

Age: 25 Position: Midfield Seasons: 3 Adam signed on a Bosman free from Divsion 4 side Belmont 3 seasons ago and has been a good, consistent performer since. A dead ball specialist, Adam is dangerous at corners and free kicks and has a habit of only scoring spectacular goals as he demonstrated in the Reserves win over the first team recently. Graham Le Saux lookalike Adam has looked after us recently, organising the club's training facilities.

Age: 32 Position: Forward/Midfield Seasons: 4 Nickname: "The White Feather" Gary has re-signed this season after missing a season with a nasty decorating problem. A busy midfielder or striker, Gary is pacy and has a good shot that has seen him score a few important goals. The White Feather is best known for saying: "Its the grey hair. The chicks just love it!"

Johno has been with us for three seasons now and last term celebrated by being joint top scorer. One of the most natural finishers of the club, Johno probably has the ability to notch over twenty goals a season, if he can stay clear of injury this could be his year. Johno is a speedy forward who can score from five yards or thirty and he will be keen to fully establish himself in the first team this season. He also holds a Loxwood record after becoming the first player to score in games for both the first team and the reserves at the same time!

Age: 16 Position: Centre Forward Seasons: 1 Johny is another former Loddon Valley Ranger who has made the step up into mens football. A useful striker with a good touch and an eye for goal, he has already impressed with his performances in the summer league. And with his weekly change of hair colour Johnny is definately going to confuse a few defenders this season.

Age: 25 Position: Forward Seasons: 3 Dan is a striker who joined us a couple of years ago after a spell in Malaysian football with Grumpus 9. Despite starting late, his first season saw him grab 15 goals, a tally which he matched last season for the reserves. In fact, Dan's goalscoring won him the coveted "Golden Boot of Borrett" last season (see photo above) Dan is a speedy forward and a few more goals could see him pushing hard for a first team place. His best known phrase was the one which sparked a war of words with big steve: "Steve you can't go out in that. Its a work shirt!"

Age: 22 Position: Forward Seasons: 2 Our Ghanian international Ben joined us at the begining of last season and has proved himself to be quite a character. A fast and skillful striker, he scored his fair share of goals last season and will be pressing for a first team place again this time round Ben would rather do an overhead kick than head the ball which means he spends most of the time on his arse but if he's not doing that he can be heard saying: "eee Nomir!" or "put me in the first team, man!".